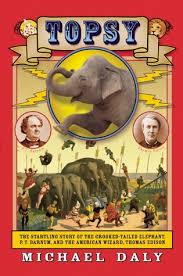 I first read Topsy by Michael Daly when it was published in 2013 but failed to write a review for reasons I now don’t recall. A second reading just completed gives me the opportunity to now do so. The reason for the rereading is because Topsy’s tragic life fascinates me.

Of course, there are many—far too many—horrifying stories of individual animals whose lives we have devalued and then deprived violently from them. But I know I’m not alone in that for often inexplicable reasons one animal stands out unasked as a totem for all the other lives we miserably waste. Topsy is mine. I’m committed to making sure she’s not forgotten by speaking out about her. I have a chapter about Topsy coming in an academic anthology on animal biographies to be published later this year. I’m working on a book about her life and death. It’s proving to be a challenge to write but one that’s inspiring me to persevere. I cannot let her life be forgotten.

More is known about how she died than how she lived. She was captured in the Indian subcontinent in about 1875 and ended up in the US via Germany to perform silly tricks in circuses. But like many like her, she was still a wild animal who defended herself when she was provoked by stupid, cruel people. She attacked them and even killed some. For this she became an elephant “gone bad” or a “rogue” elephant, as kind circus folk would say.

The price she paid was her life. In the 1800s and 1900s circus people regularly killed elephants who they believed they could no longer control. Of course, they were naive in believing they had any control over them at any time. But there comes a time when elephants like Topsy are found guilty of being a “man killer” and it was their turn to be killed.

But how to kill an elephant? Behind the glamour of the big top, circus people were principally interested in money. They feared “man killing” elephants would scare punters away. So they killed them. Topsy was poisoned, electrocuted and hung. Her murder was filmed and the subsequent film, “Electrocuting an Elephant,” is considered to be a key moment in the history of film making. It’s available to watch on YouTube.

Michael Daly’s book is an invaluable account of Topsy’s life. He draws from key contemporary sources to fill out her story and situate her life and death into a larger context of America’s history. It’s a must-read for those who care for elephants and want to understand a key moment in the history of human-animal relations. I have a few quibbles with the book, including the lack of references, but this should not deter anyone from reading it. As I continue to write my own account of Topsy, Daly’s book will be an invaluable resource.