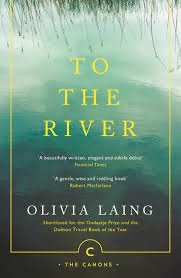 If this were a film, it would be called a Road Movie but this is a book and the road is a river. The River Ouse runs some 42 miles (68 km) from its source at Horsham, West Sussex, to Seaford, East Sussex, where it meets the English Channel. Typically, the protagonist makes a trip to learn something new, resolve an outstanding matter or have an adventure. In Olivia Laing’s book, it appears to be more about recovering from the break-up of a relationship. It’s more than that, though, as the break-up isn’t centre stage. We’re taken down several diversions that have nothing to do with her private life. Some are more interesting than others. Nonetheless, this is an engaging book and one that impresses.

“I was pulled to the Ouse as a magnet is pulled to metal returning on summer nights and during the short winter days to repeat some walks,” Laing explains. “And when things began to falter in my own life, it was the Ouse to which I turned.” (page 4) She was living nearby in Brighton when her partner left. “[I]t was then that the idea of walking the river locked hold of me.” (page 5) She told people she’s going to make a survey. She bought maps and planned her journey. “The truth was less easy to explain,” she confides. “I wanted somehow to get beneath the surface of the daily world, as a sleeper shrugs off the ordinary air and crests towards dreams.” (page 6)

The diversions include life histories of such local figures as Gideon Algernon Mantell (1790 – 1852) who was an obstetrician, geologist and palaeontologist. A curious mix as only the Regency time of Jane Austen could manage. Then there’s a contemplation of Kenneth Grahame’s classic children’s novel, The Wind in the Willows, where the characters and antics of Toad, Mole, and Badger also appeal to adults. There’s much discussion of the topography, the birds, the wild mammals, the insects, the plants, and the weather. She describes the people she sees, places she stays, and villages she visits. The descriptions are quite marvellous at times but sometimes I thought, “Get on with it!”

The book was first published in 2011. I recall from around that time hearing Laing speak at the Charleston Literary Festival. The annual festival takes the name of the Sussex farmhouse, Charleston, where artists Vanessa Bell and Duncan Grant established in 1916 and lived in for the remainder of their lives. Today, the Charleston Trust manages the property which is open to the public and is recognised as the country home for the Bloomsbury Group. Charleston is in the village of Firle. The nearest town is Lewes, where Laing stays one night.

Bell is Virginia Woolf’s sister, who, with her husband, Leonard, lived in another village, Rodmell, which isn’t so very far away from Lewes. They bought Monk’s House in 1919. Virginia lived in it until she drowned herself in the River Ouse in 1941. Leonard died in Monk’s House in 1969. The Woolfs are an important diversion for Laing. 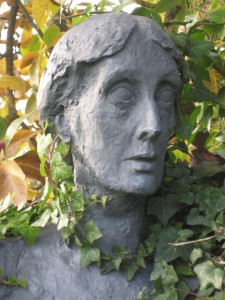 This bust of Virginia Woolf stands in the garden at Monks House where her ashes are buried.

“Water in various guises features prominently in Virginia Woolf’s novels,” writes Laing. “The Voyage Out begins aboard a liner bound for South America, and To the Lighthouse is set so close to the edge of the Atlantic that the sound of the sea is heard on almost every page.” (page 194)

The Woolfs were atheists, as it seems is Laing. After Virginia’s suicide, Leonard sets a headstone in their Rodmell garden with an inscription from the end of her novel, The Waves: “Against you I will fling myself, unvanquished and unyielding, O Death!” (page 211)

In a fitting end to the journey, Laing concludes, “[t]he home we’ll ever have is here. This is it, this spoiled earth.” As she goes to catch the train to Brighton, she says, “We crossed the river then and pulled away and in the empty fields the lark still spilled its praise.” (page 268)