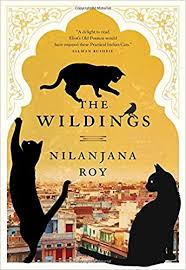 It would be too easy to dismiss The Wildings by Nilanjana Roy as the “Watership Down book but about cats.”

Richard Adams’ Watership Down is the hugely popular novel about rabbits in the English countryside. The Wildings is also a novel but its protagonists are the feral cats who live in an old neighbourhood of Delhi. Both the rabbits and the cats rise up to the challenges that threatens their existence. Both books empower their protagonists with abilities such as thoughts and speech and the agency of their actions. These are basically the books’ similarities.

Now, I haven’t read Watership Down in a long time. (And I had the honour of working with Richard Adams on an anti-vivisection campaign in the 1980s.) And there maybe more similarities between the books that I overlook here. Anyway, I found The Wildings to be as enjoyable and gripping as I recall Watership Down to be when I read it a year or two after its publication.

I don’t want to give too much away about The Wildings and its plot. On one level, its narrative is fairly straightforward. The one moan to make is that the ubiquitous major climatic battle scene left me a little cold because of its length but I think this is me. I feel the same way about battle scenes in films. Most likely, you will feel differently.

The author succeeds greatly in giving the cats characters and personalities. Also, she empowers them with what we would have to consider to be super powers. Again, I’m trying not to give away too much here. But these extra-abilities are so convincing that it wouldn’t surprise me to learn that cats actually do have them! It’s challenging enough for us to understand what’s going on in our minds and that of others in our species, let alone in the minds of other species. As everyone knows who lives with cats, they’re inscrutable beings. Who is to know what is going on when they stare into space?

The Wildings deserves the same acclaim that Watership Down enjoys. It’s a great story told with pace, humour, and style. And there’s a sequel, The Hundred Names of Darkness, to read immediately afterwards. What’s not to like?