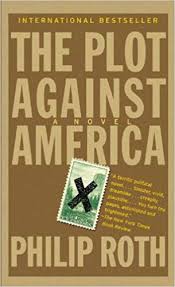 I confess to not being well-read in the great American novelists. I know I’m missing out on such authors as Fitzgerald, Steinbeck, Pynchon, Wharton, Cather, Baldwin, Piercy, Morrison, and many others. My excuse? Except for one or two of them, I simply haven’t gotten round to reading their work. Besides, I must also confess to a bias toward British, European, Indian, and Russian novelists. I kept coming across references to Philip Roth’s The Plot Against America, however, and almost always in the context of these times of Trump. I have a soft spot for political novels. My all-time favorite is Bertolt Brecht’s Threepenny Novel, which wonderfully satirizes capitalism. “The Threepenny Opera” and other musical works by Brecht and Kurt Weil are among my favorites, too. Recently, I reserved a copy of Roth’s novel from my local library and not knowing very much about it or him, I set about reading it and was blown away. Here’s why.

Roth is a great writer. How do I know this other than his reputation precedes him? Well, the writing style is clear and compelling. This is a deeply depressing and disturbing work. But it was also a great joy to read. The young Roth, for example, is the narrator and the older Roth describes a (remember this is fiction) self-realization he experiences about his mother. A regular Jewish working-class mother devoted to her family and their needs who becomes caught up in the ugly and threatening world that her beloved country is becoming.

“What it came down to for the child who was watching her being battered about by the most anguishing confusion (and who was himself quaking with fear),” Roth writes, “was the discovery that one could do nothing right without also doing something wrong, so wrong, in fact, that especially where chaos reigned and everything was at stake one might be better off to wait and do nothing—except that to do nothing was also to do something…in such circumstances to do nothing was to do quite a lot—and that even for the mother who performed each day in methodical opposition to life’s unruly flux, there was no system for managing so sinister a mess.” (pp. 340-341)

It’s more than a good read though, as I believe this extract illustrates. And it’s hard for me to explain why. At times, it reads like fiction and other times nonfiction. Here’s the rub. It is a work of fiction but it’s constructed around the story of his family, his childhood, and what it was like to grow up in the United States in the 1930s and into World War 2. At times, it also reads like nonfiction, like a cultural, social, and political history. Roth mixes fact and fiction and spins out one of the biggest “what if’s?” I have ever read. It is a remarkable construct.

What if an American hero was elected to become the U.S. president but who also happened to be a fascist?

First published in 2004, The Plot Against America precedes the present time of Trump but Roth has the canny ability to foresee what may become of his country. Making my way through the book, I felt, at times, that Roth was writing about Trump and the direction that the United States’s present trajectory. I don’t mean to suggest that this comparison is exact but at times the experience of reading this book is disturbing. In short, it’s a sobering lesson that’s all too ever-present in our lives nowadays particularly as it feels like it’s out of control. Nothing will ever be the same again. To want to know what teetering on the edge of fascism feels like, well, read The Plot Against America by Philip Roth. Don’t forget to look out the window to compare the two.