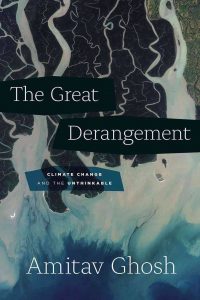 Sadly, I don’t have the time to write a considered review of this excellent book; however, if you’re concerned about climate change, as we all should, and particularly its impact on the human creative psyche, well, this is the book for you.

The novelist and polemicist, Amitav Ghosh, concludes (p. 146) that,

In short, even if capitalism were to be magically transformed tomorrow, the imperatives of political and military dominance would remain a significant obstacle to progress on mitigatory action.

In other words, the impact of climate change is so great that even the transformation of capitalism won’t be enough to deal with it. Well, that’s what I take it to mean.

Toward the end of the book, Ghosh compares and contrasts the 2015 publication of Pope Francis’s encyclical letter Laudato Si’ and the Paris Agreement on climate change. Each document has important and relevant things to say about climate change. But it appears to Ghosh that the encyclical had more meaning with, for example, more use of the word “justice” in it. The words poverty and justice, he writes, “keep close company with each other.” (p. 157.) And goes onto quote,

a true ecological approach always becomes a social approach; it must integrate questions of justice in debates on the environment, so as to hear both the cry of the earth and the cry of the poor.

I would like to believe that out of this struggle will be born a generation that will be able to look upon the world with clearer eyes than those that preceded it; that they will be able to transcend the isolation in which humanity was entrapped in the time of its derangement; that they will rediscover their kinship with other beings, and that this vision, at once new and ancient, will find expression in a transformed and renewed art and literature. (p. 162)

I’m pleased to have reread The Great Derangement by Amitav Ghosh. I highly recommend it for its insights into why fiction does not address climate change, but it fails to address the animal issue.