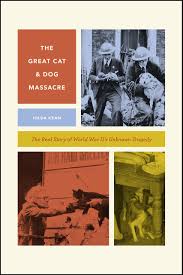 The Third Reich’s Luftwaffe dropped bombs on Hastings killing 25 people and injuring 85 on May 23, 1943. Sixteen of those who died were enjoying their Sunday lunchtime in The Swan Inn on the High Street in the Old Town. First built in 1532, The Swan Inn was rebuilt in 1879 but was completely demolished in the 1943 air raid. Today, it’s a garden of remembrance honouring the victims.

“After the flames died down,” stated the Hastings Observer when it reported on a memorial service in 2015 for the victims of the air raid, “workmen searched [The Swan Inn] all night and the following day for survivors, leading to the rescue of one man and one dog.”

Now that I live in Hastings, I’m mindful now more than ever before of the sacrifices people made during the war. The nearby presence of The Swan Inn remembrance garden to my home is a constant reminder.

We can only imagine what life was like during the war and the sacrifices people made. But after reading The Great Cat and Dog Massacre: The Real Story of World War Two’s Unknown Tragedy by local author Hilda Kean I’m more mindful of what it was like. It’s heart-warming to know that a man and a dog were rescued from The Swan Inn’s bombed out ruin. Of course, we know millions of people died in the war. But Kean’s groundbreaking book reveals that people’s cats and dogs were also victims. And not from enemy action.

After Hitler invaded Poland, Britain declared war on Germany on September 3, 1939. The conflict with Hitler was anticipated. Britain had prepared for war for years. The people were ready. The war effort began: gas masks to be carried at all times, blackout curtains to be drawn at night, coupons to be torn out from ration books, children to be sent to live in the countryside, gardens to be dug up to grow vegetables – and pets to be killed.

Between 400,000 and 750,000 dogs and cats, mostly in the London area, were killed in the first four days of World War Two. There was no government directive. Or instructions to do so from veterinarians or animal welfare organisations. Nonetheless, some people waited patiently in queues, one half a mile long, with their dogs and cats, ready to give them up and say goodbye. There was now a war on. Sacrifices had to be made.

Consequently, supplies of chloroform ran out. At least one mass grave for pets was dug. The killing continued through to November, albeit at a reduced rate, and it eventually stopped. BBC radio and newspapers urged their listeners and readers to keep their pets. The mass action that arose spontaneously abated. Pet owners themselves made the decision.

Historian Hilda Kean is an internationally recognised, respected authority in human-animal relations. In The Great Cat & Dog Massacre she describes what happened and explores the relationship people had with their pets up to and during the war. Kean is a social historian. She draws as much from the lives of people who record their experience in their diaries, letters, and unpublished memoirs as from official accounts.

In the preface to her book Animal Rights: Political and Social Change in Britain since 1800 (Reaktion, 2000), she concludes:

Animals form an integral part of human life and experience. A study of the stories we weave around them and the way we look at them might tell us about animals; it may also indicate the way in which political, social and cultural changes affecting people’s lives have developed in modern Britain. 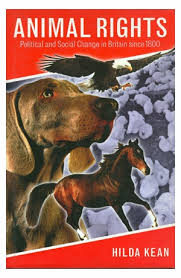 Having survived the September 1939 massacre (assuming that the dog was alive then) and the 1943 bombing of The Swan Inn, we don’t know if our anonymous canine friend survived the war and peacefully lived out her life. It would be nice to think that she did.

But what if we were to face a similar situation? What if there were World War Three? Would we be as quick to kill our beloved cats and dogs? I would like to think we wouldn’t. I believe we would hug them even more closely to our chests not only for their benefit but for ours too.

Hopefully, there won’t be another world war. And if there were I wouldn’t like to bet on anyone’s survival. Tragically, some animal welfare organisations still euthanize (read “kill”) cats and dogs. Millions of animals are killed for food and other purposes for our consumption every year.

But Kean’s important work as a historian shows how our relationship with animals is changing over time. There is progress to report with bans on fox hunting, breeding animals for fur, testing cosmetics on rabbits, and so on. It would be good to believe that as we bridge the human-animal divide, we not only tame ourselves but also the possibility of any future military conflict.

This review was also published at Hastings Online Times.