Tender is the Flesh is a dystopian novel about a virus that wipes away life from the planet. No, this isn’t about 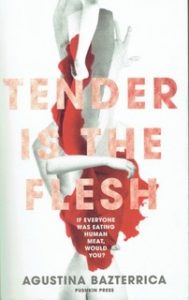 the Coronavirus and its threat to human life. It’s the animals who become extinct. Argentinian novelist, Agustina Bazterrica, adroitly and painfully imagines the consequences. We experience them through the protagonist, Marcos, who takes us through this new world where humans replace animals. Descriptions build as the present way we use, abuse, and exploit animals are replaced by humans. Humans kill humans for food, scientific research, hunting, and more. It’s a harrowing read. But worth it. Marcos works in a slaughterhouse that processes humans (“heads”). But he’s also a vegetarian and empathetic to humans and animals. Bazterrica makes a side reference to veganoids when Marcos’ sister asks if he is now one. It’s not just specially bred humans who are killed for human consumption. Break the law and your sentence could take you to the slaughterhouse as punishment to end up as someone’s meat. Why does Marcos continue to work in the human slaughterhouse? Much for the same reasons that people work in animal slaughterhouses today. “How many heads do they have to kill each month so he can pay for his father’s nursing home?” Bazterrica weaves into the narrative issues familiar to animal advocates but her reinvention of them as fiction shines them in a new light. After paying for sex, clients in a seedy nightclub “can also pay to eat the woman he’s slept with. It’s extremely pricey but the option exists, even if it’s illegal. Everyone is involved: politicians, the police, judges. Each takes their cut because human trafficking has gone from being the third largest industry to the first.” Is this just a novel for animal advocates? Certainly not. Who should read it? Everyone.