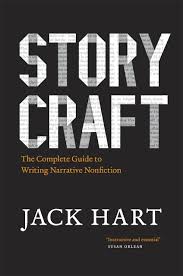 Of all the books about writing, editing and publishing I’ve read over the years, I cannot think of one that stood out more than just offering a nugget of information here and some insight over there. They were helpful but not memorable. Or even enjoyable to read. Story Craft: The Complete Guide to Writing Narrative Nonfiction by Jack Hart, however, is different and comes highly recommended.

Let’s take the author first. For 25 years, Hart served as managing editor, training editor, and writing coach at The Oregonian, the Pacific Northwest’s largest newspaper. He edited four Pulitzer Prize finalists, including winners in explanatory journalism and feature writing. He also edited a portion of the work recognized with the 2001 Pulitzer Gold Medal for Public Service and the 2006 breaking-news Pulitzer. He’s internationally recognised as an authority in narrative nonfiction.

What is narrative nonfiction?

Well, it’s not fiction because it’s nonfiction. Because it’s nonfiction it has to be based in fact and tell a true story. But it doesn’t read like journalism because it isn’t written around the traditional newspaper writing style of who, what, where, when, and why. It reads like fiction even though it’s nonfiction. So, narrative nonfiction is a creative form of writing with a narrative arc telling a factual story. But it’s more than that. There are different types of narratives and narrative arcs. There are issues about whether the author writes him or herself into the narrative. There’s the matter of research and investigations that are necessary to write narrative nonfiction. Some authors immerse themselves in their subject. For example, to write Evicted: Poverty and Profit in the American City, Matthew Desmond lived among poor and working class people for months to understand the people and the issues touched by evictions. So, in short, narrative nonfiction is creative writing based on truth that tells a story.

Of course, narrative nonfiction is much more than that and Hart does a fantastic job exploring and explaining why. The chapters address such issues as structure, point of view, character, scene, action, theme, and so on. He draws from his experience with The Oregonian to recount and analyse the articles he published and the writers he worked with in producing them. The book is a fine balance of theory and practice, and it’s easy to learn from Hart how to use both to create fine writing. 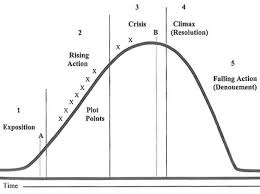 Further, the book is illustrated with the most helpful figures which depict the various structures that can be used to write narrative nonfiction. I found them to be particularly insightful in helping me to figure out the approach and structure to one of my writing projects. For example, the figure on the right shows how to structure a piece of writing as a narrative arc that’s “built from the orderly progression of facts through specific story elements.” (p. 24)

“Great narrative,” Hart writes, “rests on the three legs of character, action, and scene, and character comes first because it drives the other two.” (p. 75) If you want to write great narrative, then you can do no better than read this book.