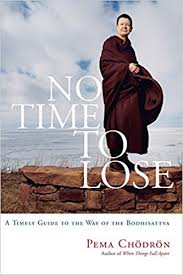 My decision to become a vegan when I was 20 led me, via a vegetarian girlfriend, to discover Buddhism and Theosophy as taught by its founder H P Blavatsky. Their teachings (karma, reincarnation, compassion, nonviolence, etc.) influenced my understanding of what it means to be vegan and what form animal rights advocacy should take. Now, as I admit in my book Growl, I have not always succeeded in adhering to these values. Nonetheless, as with living as a vegan, it’s the journey not the destination that’s important. I make mistakes and try to learn from them.

My interest in Buddhism led me to discover Bodhisattvas. They are Buddha-like spiritual beings who voluntarily give up their karmically earned right to nirvana and no longer require the necessity of further incarnations to attain this exalted state. Bodhisattvas make this selfless sacrifice to help all other beings who are still working through their incarnations to achieve nirvana. As Pema Chodron writes in No Time to Lose: A Timely Guide to the Way of the Bodhisattva:

Specifically, it is the heartfelt yearning to free oneself from the pain of ignorance and habitual patterns in order to help others do the same. This longing to alleviate the suffering of others is the main point. We start close to home with the wish to help those who we know and love, but the underlying inspiration is global and all encompassing. Bodhichitta [the Sanskrit term often translated as “awakened heart”] is a sort of “mission impossible”: the desire to end the suffering of all beings, including those we’ll never meet, as well as those we loathe. [p. xiii]

The tremendous sacrifice that Bodhisattvas make inspires me in my advocacy as I know it does for many animal advocates, social justice campaigners, and compassionate people as they live their lives every day. I have always understood vegan animal rights advocacy as a struggle to end animal cruelty and exploitation and instil compassion and moral and legal rights for all sentient beings regardless of species. In short, it’s about the animals and stopping what we do to them by changing our hearts and minds. In my book, it’s not about being the sexiest vegan or the vegan who can lift the most weights. It’s all about what happens in our hearts and minds. It’s learning about how to put others ahead of our selfish, egotistical needs. What’s so wrong with altruistic compassion?

From time to time, I like to recharge my commitment to altruistic compassion by reading such books as Pema Chodron’s No Time to Lose. This book is among several which discuss the teachings of Shantideva who lived in India in the eight-century. The teachings are reproduced in the book along with Chodron’s down to earth thoughts on them. Reading Shantideva’s many insights, every now and then, one stand out as it resonates with me. For example,

The pains and sorrows of all wandering beings—
May they ripen wholly on myself.
And may the virtuous company of bodhisattvas
Bring about the happiness of beings.
[10.56; p. 359]

I’ve been reading this book for several months. It’s not a book to read quickly. While it’s not difficult to read, it does demand our thoughtful attention. There’s much for everyone to learn here but particularly anyone who wants to learn how to be a more effective advocate for a compassionate world.