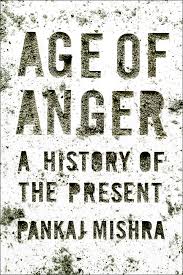 Pankaj Mishra’s Age of Anger: A history of the present may not have all the answers–I would be wary of any book or anyone that claimed that they did–but it did bring into focus for me the issue of ressesntiment.

Mishra describes ressesntiment as the “structure of societies where formal equality between individuals coexists with massive differences in power, education, status and property ownership.” (p. 333)

He goes on to say

Thus, the majority sees social power monopolised by people with money, property, connections and talent; they feel shut out from both higher culture and decision-making. They see immigration as a ploy to create an industrial reserve army that exerts a downward pressure on salaries while simultaneously increasing corporate profits. (p. 333-334)

The appeal of demagogues lies in their ability to take a generalised discontent, the mood of drift, resentment, disillusionment and economic shakiness, and transform it into a plan for doing something. They make inaction seem morally degrading. And many young men and women become eager to transform their powerlessness into an irresponsible rage to hurt or destroy. (P. 343-344)

Sadly, it’s taken me too many months to complete this breathtaking book with its grand sweep of ideas. I need to read it again to fully appreciate its depth. But much of the first half was beyond me as it explored philosophers, including Rousseau, and others and their ideas I’m unfamiliar with. This concern diminished, however, as I proceeded further into the latter half of the book.

Now more than ever we seem to be struggling to make sense of the world and all the issues I listed at the beginning of this review. Mishra’s Age of Anger is an important tool to help identify what went wrong.