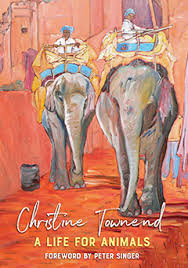 Her work for animals can be roughly divided between the campaigns of Animal Liberation Australia and the rescue work of Help in Suffering in India. Along the way, she finds the time to establish two more animal shelters, Kalimpong Animal Shelter and Darjeeling Animal Shelter. She’s also the author of her 1985 book, Pulling the Wool: A New Look at the Australian Wool Industry, and a wonderful novel called Moti that’s about an Indian elephant. (Read my review of Moti here.)

Christine’s lifework for animals is a heroic and pioneering effort. It’s told honestly with Christine’s writing taking the reader along with you on her journey. And what a journey! She doesn’t hesitate to talk about the intransigence of some people who profit from animal cruelty and oppose any reforms. There are the health issues that challenge her in India and the attack by a Tibetan mastiff and how she courageously coped with these situations. And many more adventures and accomplishments.

Writing about her visits to slaughterhouses in India, she reflects

They were killed without a word of thanks, without even one touch of love. Perhaps somewhere in a field, secretly, a peasant farmer had embraced those sweet-smelling necks one last time. Perhaps once they had been loved, had been thanked, had known compassion. I wished that my own love could assuage a lifetime of human indifference. I loved them as deeply as it was possible to love. (p. 107)

This is an inspiring read that demonstrates well how one person can make such a difference to the lives of all animals regardless of species wherever they live.