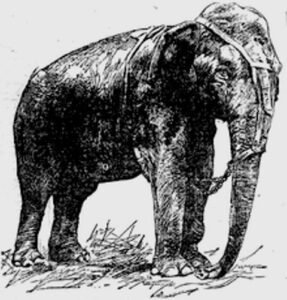 One hundred and twenty years ago today, January 4, 1903, Topsy, a female Asian elephant, was electrocuted to death at Luna Park, one of America’s first amusement parks, on Coney Island, New York. The Edison Manufacturing Company filmed the electrocution. The film ‘Electrocuting an Elephant’ is available on YouTube. It’s attracting more than 1.4 million views. If anyone knows anything about Topsy, it’s because they saw that film. I want Topsy remembered for more than being that electrocuted elephant, which is why I write her biography.

I first learned about Topsy in the 1990s. I was working with the talented filmmaker Jayne Loader on her outstanding documentary about animals. Her film of pre-existing footage cut from many sources and woven together brilliantly told the story of our messy relationship with animals. ‘Electrocuting an Elephant’ was in the opening sequence. Sadly, the film is uncompleted, but I’m indebted to Jayne for introducing me to Topsy. I promised Topsy back then she is not forgotten. Fast forward to today as I research and write her story. The book is progressing well, but it takes time.

Look for an important announcement I will be making soon about Topsy. For today, however, please join me in holding Topsy in your heart as we note the horrific 120th anniversary of her electrocution. Thank you.