Today I start my 47th year as a vegan, working full-time in animal rights. My focus for 2023 is to write the biography of Topsy the elephant, serve on the volunteer board of the Culture & Animals Foundation, and work with The British Library in London and Tier im Recht in Zurich to preserve the history of the animal rights movement. 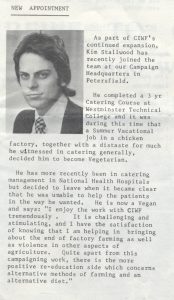 Compassion announces my appointment in its newsletter, “Ag Scene,” in 1976.

This is how Compassion In World Farming introduced me to their supporters in 1976:

As part of CIWF’s continued expansion, Kim Stallwood has recently joined the team at our Campaign Headquarters in Petersfield. He completed a 3 yr Catering Course at Westminster Technical College and it was during this time that a Summer Vacational job in a chicken factory, together with a distaste for much he witnessed in catering generally, decided him to become Vegetarian. He has more recently been in catering management in National Health Hospitals but decided to leave when it became clear that he was unable to help the patients in the way he wanted. He is now a Vegan and says: “I enjoy the work with CIWF tremendously. It is challenging and stimulating, and I have the satisfaction of knowing that I am helping in bringing about the end of factory farming as well as violence in other aspects of agriculture. Quite apart from this campaigning work, there is the more positive re-education side which concerns alternative methods of farming and an alternative diet.”