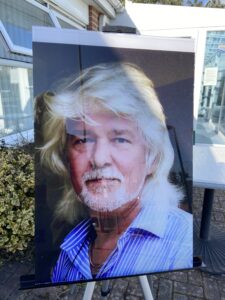 As I walked to my office in Hastings last June, I collapsed unconscious in the street and stopped breathing, I was taken to the Conquest Hospital. It was there that I was told I had been born with a faulty heart valve that had become atrophied and had to be replaced immediately. I was not allowed to go home before the operation, which took place three weeks later at the Royal Sussex County Hospital in Brighton. While at the Conquest I met Kit Woolven who was in the bed opposite mine. We got to talk and shared the reasons why we were both in the hospital. Kit, five years older than me, had a history of heart and other medical issues. I had never spent a night in hospital before. I was anxious about my situation and nervous about the operation. Kit’s gentleness and humour reassured me that everything would be fine, as he had had similar surgeries and much else besides. Kit and I subsequently became friends. We met for lunch a couple of times. In late January, Kit’s wife, Fay, told me that he had died suddenly in the Conquest. Yesterday, we attended a celebration of his life. While my friendship with Kit lasted only months, I will remember him for the rest of my life as someone whose compassion and thoughtfulness are examples to us all.