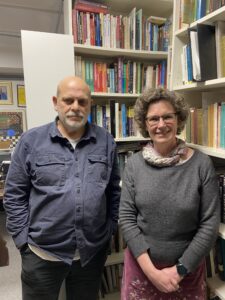 Emme Ledgerwood, The British Library, and myself in my office after we completed the second of a four-part series of oral history interviews.

I don’t think the British statesman Winston Churchill had animal rights in mind when he wrote, “Those that fail to learn from history are doomed to repeat it.” But this pithy observation contains a general truth that’s true for the many individuals and organisations who collectively form the social justice movement for nonhuman animals.

Regardless of whether we understand ourselves as animal welfare, animal defense or animal rights, or a combination thereof, or anything else, there is generally, I believe, a lack of knowledge and understanding of the people, events, and history that precedes our involvement.

Concern for animals didn’t start when I joined, as I naively and wrongly believed years ago, but many thousands of years ago with, for example, the ancient Greeks in the west and such belief systems as Buddhism in the east. Bringing this line of thinking to more recent times, the bicentenary of the passage of the Ill-Treatment of Cattle Act by the British Parliament in 1822 celebrates what is generally recognised as the first piece of animal welfare legislation passed by an elected government. So, it could be argued that the contemporary movement for animals is 200 years old. The key point is not to argue whether it did or didn’t but to know that the Martin’s Act existed at all. And that this legislation led to a series of events that includes a fascinating history of individuals up to the present time.

I have never thought I was making history from 1976 with my commitment as a vegan and professional involvement with animal rights; however, looking back on this body of work it is clear that this is a history that’s important to preserve and make available to others if for no other reason they can benefit from understanding any accomplishment that there may be and learn from the mistakes I most assuredly made.

The British Library, the UK’s national library with an unprecedented international reputation, acquired 36 boxes of my research materials in September 2020. This included 600 organisation files, 150 people files, 118 subject files, two laptops, engagement diaries, and address books. Currently, this material, the Kim Stallwood Archive, is being catalogued and will be made publicly available to anyone interested in learning more about the contemporary animal rights movement.

Further, The British Library is presently conducting a series of four oral history interviews with me that will join the archive thereby complementing the material already present. The photograph is of Emme Ledgerwood and myself after we completed the second recorded session that lasted about three hours. The oral history recordings will be also made publicly available.

While the Kim Stallwood Archive at The British Library is a great honour, I am excited more by the library recognising animal rights as a social justice movement worthy of its attention and that my materials will be publicly available for anyone who wants to understand the past and strive for future successes in achieving moral and legal rights for animals.