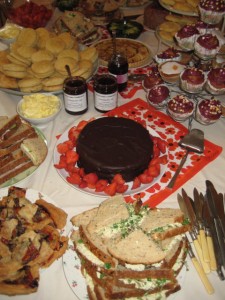 Who says vegans can’t have a traditional English cream tea when they want one?

I recognise that I’m not the demographic who will go into a KFC to eat vegan Beyond Chicken.

One of the reasons why I’m a vegan is because I find the visceral experience of eating the charred remains of dead animal parts—and their counterfeits—revolting. I like fresh ingredients simply cooked. Indian food is, of course, the exception.

I gave up buying chips (I live in England) from fish and chip shops because the chips are cooked in the same oil as the fish. I don’t want to eat chips that smell of fish. They are not vegan to me. Of course, I knowingly make vegan comprises with such things as medicines and medical procedures. Almost always there is no option. I draw the vegan line where I can. And the line sometimes moves around. Living as a vegan is a journey and not a destination. I’m not interested in shouting from the land of purity or being holier than thou. Life is about balancing idealism with pragmatism. I’m a vegan for the animals and committed to doing as much as I can for the cause.

If some vegans want to go to KFC and eat Beyond Chicken, well, that’s their prerogative. But I reject anyone’s call to not ask for their vegan food not to be cooked on separate equipment from where the meat is cooked because it may annoy the restaurant. If that’s what some vegans want to do, well, let them do it. I don’t care if it offends restaurants to do so. I find any restaurant serving the charred remains of dead animal parts offensive anyway.

I’ve been vegan for so long (nearly 50 years) that I’m conditioned to only see fast food outlets as public toilets. And that’s how I will continue to use them. That’s the only way I intend to spend a penny on them.