The human soul, it seems to me, orientates itself afresh every now and then. It is doing so now. No one can see it whole, therefore. The best of us catch a glimpse of a nose, a shoulder, something turning away, always in movement. Still it seems better to me to catch this glimpse. 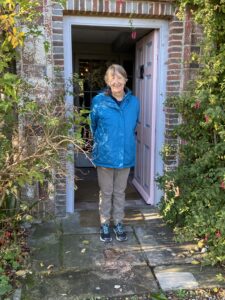 Carol standing in the front doorway to the Charleston farmhouse.

Such a complex thought is succinctly and poetically stated. I was intrigued. Of course, I’d heard of Virginia Woolf but knew nothing about her or read anything. Nonetheless, this quote, along with references to her Carol included in her innovative book, prompted me to take the road to Bloomsbury.

Named after a neighbourhood in central London, the Bloomsbury group was an informal club of friends and associates who met and talked under the rule that nothing is off-limits to discuss. Virginia Stephen and her sister, the artist Vanessa Stephen, were just two members of this many-faceted and multitalented group, which included the novelist E. M. Forster, painter Duncan Grant, art critic Clive Bell, economist John Maynard Keynes, author Leonard Woolf, and biographer Lytton Strachey. 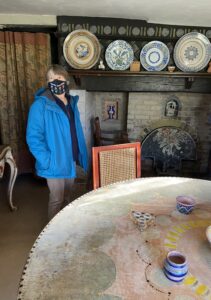 Carol admiring the dining room and the painted table by Vanessa Bell and the china collection. The fabric, ‘Clouds,’ hanging in the doorway was designed by Duncan Grant and is one of the few original examples of fabric to survive.

Arising from these evenings, friendships formed. Vanessa married Clive and had two sons, Julian and Quentin.  Then, in 1916, the Bells moved to the Charleston Farmhouse near Firle in East Sussex with Duncan Grant and his lover David Garnett. Virginia Stephen married Leonard Woolf and later lived in Monk’s House in the nearby village of Rodmell.

While there’s much more to be said about this creative group of people, for my purposes it is sufficient to say that Charleston became the heart of the Bloomsbury group. And a major attraction to those who find them fascinating, including Carol and myself, as I had become much more familiar with Virginia Woolf’s work. 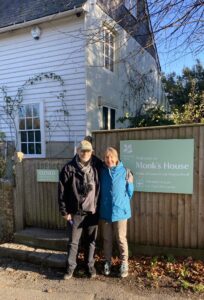 We’re standing outside Monk’s House, the home of Virginia and Leonard Woolf.

For years, Carol and I talked about her visiting Hastings, East Sussex where my partner, Gary, and I moved to in 2007, to visit Charleston and Monk’s House. We can also visit, I promised Carol, Sissinghurst and Knole, which are two homes where Virginia Woolf’s close friend, Vita Sackville-West lived. Vita and her husband, Harold Nicholson, created at Sissinghurst my most favourite garden.

Recently, Carol was in England to take part in a debate hosted by the Oxford Union with Heather Mills and philosopher Jeff McMahon. They successfully defended the motion that

This House Should Move Beyond Meat.

Carol arrived in Hastings the following day elated with her and Heather’s and Jeff’s victory for veganism. The next day, Gary and I took Carol to Knole and Sissinghurst, which are operated by the National Trust, which incidentally had just voted to ban fox hunts from all their properties. The National Trust is one of the country’s largest landowners. The following day we visited Charleston and the delightful village of Alfriston, which is home to one of my favourite bookshops, Much Ado Books. Sadly, Monk’s House was closed for the season but we were able to see some of the property from the road and a churchyard behind the house. 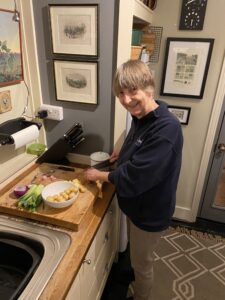 Carol preparing in our kitchen the vegetables for the soup that became our supper after our visits to Charleston, Monk’s House, and Much Ado Books in Alfriston.

On our last evening together, Carol very kindly made a leek soup adapted from a recipe of her father’s. We reflected upon the hectic two days but we felt satisfied in knowing we succeeded in visiting the Bloomsbury homes and gardens we wanted to see.