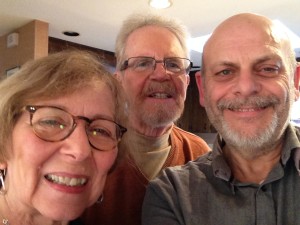 Nancy and Tom Regan and myself.

Nancy Regan, who co-founded the Culture and Animals Foundation (CAF) with her husband Tom, died in Raleigh, North Carolina on Wednesday, October 20, aged 83. With Tom’s passing in 2017, this is, for me, the end of an era in animal rights.

They were among the few of the movement’s founders whose philosophical and artistic insight and opinion I sought to guide me in my animal rights work. This isn’t to say that we always agreed. We didn’t. But it was on those infrequent occasions when their wisdom was particularly valuable.

I met Tom and Nancy at the RSPCA’s Animal Rights Symposium at Trinity College, Cambridge in 1977. I suspect from later conversations with them, however, they don’t remember meeting me. But that’s as it should be. They were already animal rights giants. I was an impatient and angry young vegan who had yet to make his mark in animal rights. After I moved to the United States in 1987, our paths crossed more frequently and we worked together when I was with the Animals and Society Institute. It’s an honour now to serve, as a volunteer, on CAF’s board of directors. We inaugurated the Nancy Regan Arts Prize in 2021 in her honour.

Nancy was truly unique and special. She was always welcoming and asking how you were. Her determination, lightened by dry humour, was inspiring and enjoyable. She didn’t suffer fools gladly and wasn’t shy from speaking her mind.

Please click on this link to read the obituary published in the Raleigh News & Observer and here for CAF’s appreciation.