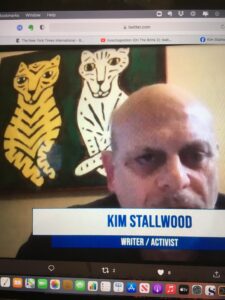 Everywhere around the world insects are under threat. These threats take many forms not least from the global use of chemicals in support of mono cropping to grow food to feed to animals intensively raised in industrial farms.

The plight of insects was featured in Insectageddon produced by Writers Rebel and the second in their series called On the Brink.

Acclaimed novelist Chloe Aridjis interviewed me about my lifelong vegan animal rights activism and how it relates to insects. It was a great honour to be involved and I learnt a lot about insects.

Here’s an excerpt of what I said.

How did your activism begin and where it has taken you?

My activism began in a chicken slaughterhouse. It was the summer of 1973 when I was a student. I became a vegetarian on the first of January 1974. Two years later I was a vegan. Since 1976 I have held leadership positions with some of the world’s foremost animal rights organisations. Today, I work as an author, independent scholar, and consultant in animal rights. My primary projects include writing the biography of an elephant called Topsy and preserving the history of the animal rights movement, which includes my archive at The British Library.

For those who don’t know, please define the notion of speciesism, and where insects fit into all of this? 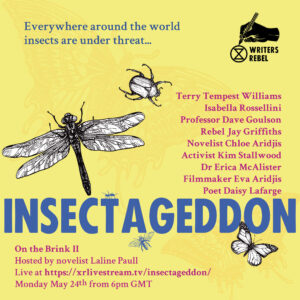 I see a moral and political struggle against a network of interconnected oppressions. This struggle, based on an assumption of superiority, challenges the domination, inequity, and exploitation of others that subjugates them. We’re familiar with sexism, racism, heterosexism, and other forms of oppression. I see speciesism as sitting alongside them. Speciesism is our discrimination against or exploitation of animals. Insects are also caught up in the network of interconnected oppressions. We don’t value their lives. We routinely kill them individually in our homes and use chemicals to mass slaughter them.

What are your thoughts on government’s latest Animal Sentience Bill: progress? loopholes? what still needs to be done?

The UK government’s new Animal Sentience Bill is generally welcomed. But I’ve yet to be convinced of the government’s commitment to implement legislation that will in a meaningful way address the consequences of legally recognising animal sentience. I want to hear more from the government about the areas of animal use and abuse it will make illegal, and how they will be prohibited by effective law enforcement. Also, I want the legislation to seriously address insects given how they’re essential for a healthy planet.

What can viewers do to help insects? What are the most important steps people can take, today?

Talk to our elected representatives about the climate crisis. Help them to develop public policy and pass legislation. Join a political party. Get involved. Stand for election.

Buy organic or locally produced food whenever possible. From window boxes to gardens, we can grow food. Buddy up with friends and neighbours to rent an allotment from your local council. Start turning your vegetable and fruit kitchen waste into rich compost.

But the most important step I believe everyone can take is to go vegan. Food grown for direct human consumption uses less energy, water, and causes less damage to the environment. Raising, killing, and processing animals makes no economic or ecological sense. If we truly want to help insects, we must become vegans. It is the only practical and ethical way forward.

Click on this link to watch Insectageddon. My full interview with Chloe Aridjis starts at 1:12:18.