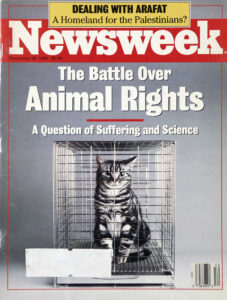 The Battle Over Animal Rights is the cover story of Newsweek published on December 26, 1988.

Regardless of their motivation and ideological foundation, there is an important and diverse history of individuals and organisations who have rescued and campaigned for animals over the years. This rich history has been preserved on an ad-hoc basis by a variety of individuals, organisations, and libraries. The forthcoming bicentenaries of the Martins Act in 2022 and the foundation of the RSPCA in 2024 provide a unique opportunity to inaugurate new initiatives to not only preserve this history but also understand what can be learnt from it. I am reminded of the philosopher George Santayana when he said, ‘Those who cannot remember the past are condemned to repeat it.’ 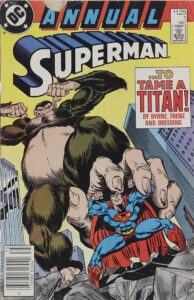 Thought to be the first animal rights Superman comic published in 1987.

Those who are familiar with my animal rights work will know that since my involvement with the animal rights movement began in the 1970s personally as a vegan and professionally with some of the world’s leading organisations, I have built an extensive archive on animal rights and related issues. This included The British Library establishing the Kim Stallwood Archive last year when they accepted from me 36 boxes of materials. There remains in my office a significant collection, including more than 2,000 books on animals and related matters. Stay tuned for further announcements about the future of my collection.

Meanwhile, I continue to collect materials and collections from individuals and organisations and add them to my archive. Recently, I received from an activist in northwest United States a small but important collection of materials. I want to share some of them here.

The Superman comic ended its story with this declaration

And they were rights. There was a monster in Metropolis that day. An ugly, raging monster, full of death and destruction. But it did not wear the face of the chimp who died in my arms. It wore the face it’s worn for all the centuries since Cain killed Abel. The face of a greedy selfish beast. A beast without equal in the Animal Kingdom. A beast called Man.

Newsweek‘s cover feature, ‘The Battle Over Animal Rights: A Question of Suffering and Science,’ came with the subheading, ‘A growing social movement raises a thorny ethical question: do the practical benefits of animal experimentation outweigh the moral costs?’ The article concluded

Maybe there is no reasoned moral justification. Maybe animal experimentation is best understood in purely practical terms, not as a prerogative or an obligation but as a strategy for survival. Whatever the answer, scientists can no longer afford to pretend that their critics’ moral concerns are frivolous. Profound questions are being raised, and ignoring them won’t make them go away.

Preserving the movement’s history and understanding our past is vital if we want to learn to be more effective advocates for animals. 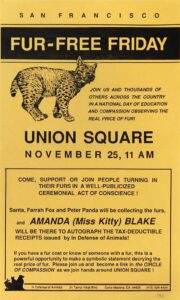 This poster for a Fur-Free Friday protest in San Francisco was produced by In Defense of Animals in 1988.