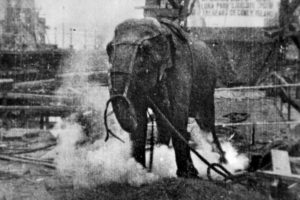 I first learned about Topsy in the 1990s. I was working with the talented film-maker Jayne Loader on her outstanding documentary about animals.

Jayne’s film was composed of pre-existing footage from many sources woven together to tell the story of our complex and confusing relationship with animals. The opening sequence includes the film, “Electrocuting an Elephant”, made by the Edison Manufacturing Company. This brief film is now recognized as a major development in filmmaking history. It’s thought to be among the first to film the death of an animal or a human. It’s on YouTube with more than 1 million views.

Sadly, Jayne’s film wasn’t completed; however, I’m indebted to her for introducing me to Topsy. Consequently, I made a commitment to Topsy that her tragic life and horrible death should never be forgotten. 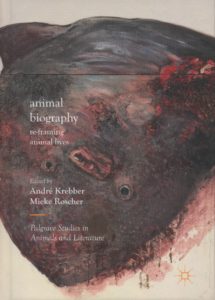 Fast forward to now. One of my two priority projects is to research and write a biography of Topsy. The other one is to find a home for my animal rights collection in addition to the Kim Stallwood Archive that The British Library recently acquired.

I think about Topsy every day. The 118th anniversary of her gruesome death is the one day of the year when I wish for everyone to take a moment to hold Topsy in your heart.

To learn more about Topsy, please read my chapter, “Topsy: The Elephant We Must Never Forget“, in Animal Biography: Re-framing Animal Lives edited Andre Krebber and Mieke Roscher and published by Palgrave in their series Studies in Animals and Literature in 2018.