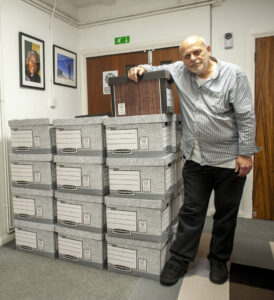 In my office, I stand next to the 36 boxes of materials packed and ready for The British Library to take.

The Kim Stallwood Archive of research material documenting the history of the animal rights movement will become part of the British Library’s permanent holdings starting in autumn 2020. The British Library is the national library of the United Kingdom and provides information services to academic, business, research, and scientific communities.

My unique archive chronicle the animal rights movement’s development from the mid-1970s through to the late 1980s. The research material, which comprises nearly 600 organisation files, 150 people files, and 118 subject files, complements the library’s earlier acquisition of materials from writer and animal advocate Richard Ryder.

I am honoured to partner with the British Library to make these vast materials available publicly for the first time. The history of the animal rights movement parallels the struggle of other social and political movements to give voice and recognition to those who have long suffered without either. I have devoted my life to this mission. 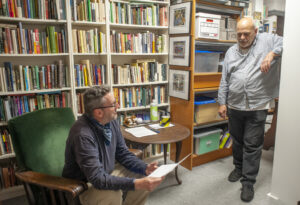 Jonathan Pledge, Curator of Politics and Public Life at The British Library, and myself meeting in my office.

4 comments on “The Kim Stallwood Archive at The British Library”