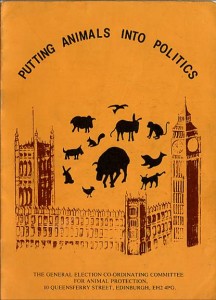 I will be a speaker at the MANCEPT Workshops, which is an annual conference in political theory organised under the auspices of the Manchester Centre for Political Theory. My presentation, Putting Animals into Politics, will be part of the workshop series called “Just Animals? The Future of the Political Turn in Animal Ethics.”

Here is a summary of my presentation:

An important but overlooked episode in the history of the political turn in animal ethics is the Putting Animals into Politics campaign produced by the General Election Coordinating Committee for Animal Protection, a coalition of British animal advocacy organisations, in the 1970s and 1980s. GECCAP succeeded in establishing the status of animals as a mainstream political issue by lobbying the major political parties (Conservative, Labour, Liberal) to include for the first time pro-animal manifesto commitments in the 1976 general election. The animal protection movement in the United Kingdom, and increasingly in Europe and elsewhere, continues to organise similar public education and public policy campaigns in subsequent general elections. These campaigns help to build the necessary public and political support that make possible such legislation as the ban on fur farming in England and Wales in 2000 and the EU ban on cosmetic testing in 2004. Since the 1970s, the Labour Party and Labour governments have been in the forefront of public policy and legislation for animals. For example, in 1978 the Labour Party published “Living Without Cruelty: Labour’s Charter for Animal Protection (A Policy background paper)” and its 50-point draft policy document, “Animal Welfare For The Many, Not The Few” in 2018. In my presentation, I will draw from my personal recollections as the campaigns organiser for Compassion In World Farming (1977-1978) and British Union for the Abolition of Vivisection (1978-1986) and my active role in the GECCAP campaigns to reflect upon this important history and suggest ways in which the animal advocacy movement can learn from it today. For example, I will propose a five-stage analysis for the animal protection movement as a tool to evaluate the progress made in furthering the political turn for animals and establishing animal rights as a mainstream political issue.