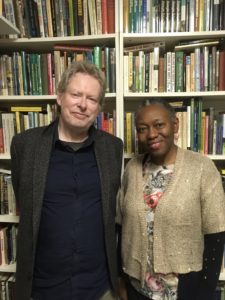 “The Oxford Group and the Emergence of Animal Rights: An Intellectual History” is the name of a research project led by Professor Robert Garner and Research Associate Yewande Okuleye from the University of Leicester. Recently, Robert and Yewande visited my office to record an interview with me and review materials in my animal rights collection for the project.

The Oxford Group is the name given to an informal group of young academics who lived in Oxford in the 1970s who became vegetarians and explored animal ethics. The Oxford Group is generally recognized as initiating the philosophical foundation to the contemporary debate about our ethical relationship with other animals. The Oxford Group is an important but little-known historical development in animal ethics and the animal rights movement. This research project, and the subsequent publication of a book, are the first of their kind to explore the Oxford Group. 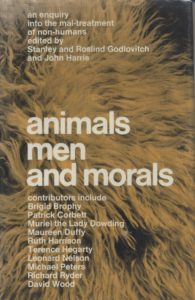 The Oxford Group included Stanley and Roslind Godlovitch, Richard and Mary Keshen, Peter and Renata Singer, and John Harris. Their discussions led to the publication of Animals, Men, and Morals: An Enquiry into the Maltreatment of Non-Humans edited by Harris and the Godlovitches (London: Victor Gollancz, 1971). Several key players at that time also contributed to this anthology, including the novelist Brigid Brophy whose essay, “The Rights of Animals”, published in The Sunday Times (October 10, 1965) I consider to be the beginning of the contemporary animal rights movement. Other notable contributors included Ruth Harrison, author, Animal Machines (London: Vincent Stuart, 1964) and Richard D. Ryder, author, Victims of Science: The Use of Animals in Research (London: Davis-Poynter, 1975). Peter Singer’s review of Animals, Men, and Morals called “Animal Liberation” in The New York Review of Books published on April 5, 1973, subsequently led to the publication of his celebrated book with the same name in 1975. 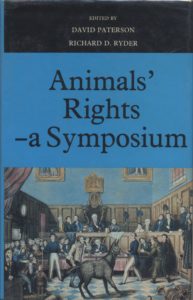 I became a vegetarian on January 1, 1974, after spending the previous summer working, when I was a student, in a chicken slaughterhouse, and became a vegan two years later. I was not part of the Oxford Group but met some of them for the first time at The Rights of Animals two-day symposium organized by the RSPCA at Trinity College, Cambridge in 1977. At the time, I was working as the national campaigns organizer for Compassion In World Farming whose co-founder, Peter Roberts, took me to what was the first international animal rights conference. The presenters included Brigid Brophy, John Harris, Ruth Harrison, Peter Roberts, Richard D. Ryder, and philosopher Tom Regan. (See Animals’ Rights—a Symposium edited by David Paterson and Richard D. Ryder, Centaur Press, 1979).

In my interview with Yewande I recalled the Cambridge conference and related matters to the Oxford Group, and, with Robert, we reviewed materials in my collection from the 1970s and the 1980s. It’s a great honor to assist them in their research.

To learn more about The Oxford Group and the Emergence of Animal Rights: An Intellectual History research project, please visit its website.