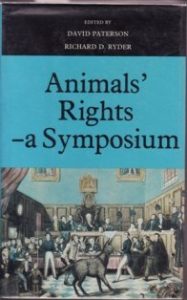 This is the anthology that captured what was said at the RSPCA’s Animals’ Rights–a Symposium held in 1977.

In August 1977, Compassion In World Farming’s co-founder, Peter Roberts, took me as his Campaigns Officer to a symposium organised by the RSPCA at Trinity College, Cambridge. This conference, which was called ‘The Rights of Animals’, was my first opportunity to meet and hear from the philosophers Tom Regan (1938-2017) and Stephen Clark, the authors Brigid Brophy (1929-1995) and Ruth Harrison (1920-2000), the campaigners Clive Hollands (1929–1996) and Lord Houghton of Sowerby (1898–1996), the psychologist Richard D. Ryder, and the Reverend Andrew Linzey, an authority in Christianity and animal rights.

All who spoke made a significant impact on my understanding of the subject and what form our campaigns should take. As with many conferences, the discussions among attendees away from the official programme stimulated me mentally and opened up a new world about our multifarious relations with animals. It was also at this conference that I met author Jim Mason who was working with the philosopher Peter Singer on their 1980 book Animal Factories. 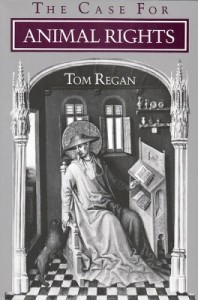 The Case for Animal Rights by Tom Regan was not published by the University of California Press until six years later in 1983.

The proceedings are collected in Animals’ Rights: A Symposium, which I recommend as a summation of some of the thinking of that time (Paterson and Ryder, eds., 1979). The gathering’s significance as a watershed moment in the history of the modern animal advocacy movement can be ascertained by Singer’s response, whose groundbreaking Animal Liberation had been published in 1975. Singer didn’t attend, but he noted in the preface to the anthology that all he could do was kick himself for not going (xii).

The conference concluded with attendees signing on to the resolution ‘The Rights of Animals: A Declaration against Speciesism’, which ran as follows: ‘Inasmuch as we believe that there is ample evidence that many other species are capable of feeling, we condemn totally the infliction of suffering upon our brother animals, and the curtailment of their enjoyment, unless it be necessary for their own individual benefit. We do not accept that a difference in species alone (any more than a difference in race) can justify wanton exploitation or oppression in the name of science or sport, or for food, commercial profit or other human gain. We believe in the evolutionary and moral kinship of all animals and we declare our belief that all sentient creatures have rights to life, liberty and the quest for happiness. We call for the protection of these rights.’ (viii) 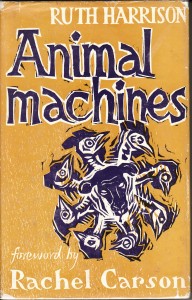 Ruth Harrison’s groundbreaking book exposed factory farming when it was published in 1964.

The Rights of Animals symposium provided a ‘Eureka’ moment in that I discovered ideas about animal rights and how to campaign for them. I cannot remember which speaker made me go ‘Aha!’ but I clearly recall experiencing the realisation that I was hearing something for the first time from many speakers that articulated my thoughts for me. The conference showed me it was possible to sort out my muddled thinking so I was able to clarify and articulate what I really wanted to say.

Until that point, my mind was a turbulent mess of half-baked notions and outraged sentimentalities. When someone pressed me on what I thought, I would stammer that ‘animals suffer and experience pain’, that ‘factory farming is wrong’, and that ‘there should be laws to stop it!’ These heartfelt responses were expressed with passionate confidence. My self-righteous indignation empowered me to speak out but my lack of understanding meant my arguments were often ill-informed and undeveloped. I had to learn how to express myself in a way that withstood philosophical challenge. This encouraged me to learn more. I set out with no clear plan. I bought books when I saw them and read them when I could. I discussed ideas with like-minded activists at protests and in the pub afterwards. I attended presentations by philosophers, authors, and politicians whenever there was an opportunity.

In fact, this is what I continue to do some 40 years later.