In 2012, I wrote here that Sue Coe is “quite simply, my favourite living artist.” For me, her work sits 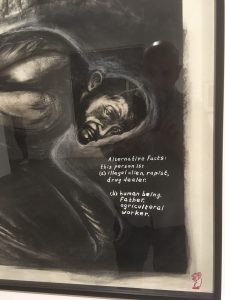 The text reads: “Alternative Facts: this person is (a) illegal aliens, rapist, drug dealer; (b) human being, father, agricultural worker.”

proudly along a continuum which includes George Grosz, Otto Dix, Kathe Kollwitz, on the one hand, and El Greco, Thomas Bewick and Goya, on the other.

After seeing her solo exhibition, Sue Coe: Graphic Resistance, at the Museum of Modern Art’s PS1 gallery in Long Island City, NY, I’m even more confident of my opinion.

Sue Coe shows us a world where the fragile and the disenfranchised of both the human and the animal kingdom are all in great peril. The viewer identifies with these creatures, for we, too are animals she reminds us, confronted by the mechanism of mass slaughter we perpetuate on ourselves and non-human animals in a world ever more dehumanized.

Although I’m familiar with Sue’s work, and published it in The Animals’ Agenda magazine during 1990s, this exhibit was my first opportunity to see a broad sweep of her creativity from the 1970s, when she was a freelance news illustrator for The New York Times, to the present. In 2012, I wrote here that

Her creativity rightfully stands on its own merit and how she skilfully uses it to explore social injustice, including their interrelationships. 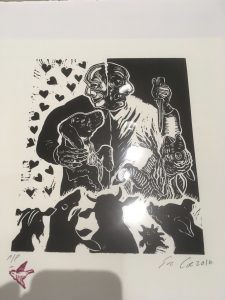 This unique quality of her work is self-evident from the decades of work on show.

Among the many stand out pieces was one (see right), that I failed to make a note of its correct title, that reminded me of Henry Salt, the English vegetarian ethical socialist (1851-1939) and his poem, “Mr Facing Both Ways” published in the Vegetarian News in 1925.

When the Huntsman claims praise for the killing of foxes,
Which else would bring ruin to farmer and land,
Yet so kindly imports them, preserves them, assorts them—
There’s a discrepance here that I’d fain understand.
When the Butcher makes boast of the killing of cattle,
That would multiply fast and the world over-run,
Yet so carefully breeds them, rears, fattens and feeds them –
Here also, methinks, a fine cobweb is spun.
Hark you, then, whose profession or pastime is killing!
To dispel your benignant illusions I’m loth;
But be one or the other, my double faced brother,
Be slayer or savour – you cannot be both.

What fun it would be to bring Sue Coe and Henry Salt together for an afternoon and be engaged in conversation with them. Learn more about Sue Coe here and Henry Salt here.

Sue Coe: Graphic Resistance is open to the public until September 9, 2012. The New York Times recognised the show as one of “10 Can’t-Miss Summer Shows in New York.” See “The Art of Staying Cool.”