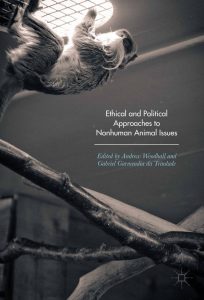 My chapter, “Are We Smart Enough to Know When to Take the Political Turn for Animals?”, is published in the new anthology, Ethical and Political Approaches to Nonhuman Animal Issues, edited by Andrew Woodhall and Gabriel Garmendia da Trindade, published by Spinger/Palgrave Macmillan.

To read a final draft of the chapter, please click on this link: Stallwood, Kim Ethical and Political Final Draft PDF.

This book offers ethical and political approaches to issues that nonhuman animals face. The recent ‘political turn’ in interspecies ethics, from ethical to political approaches, has arisen due to the apparent lack of success of the nonhuman animal movement and dissatisfaction with traditional approaches. Current works largely present general positions rather than address specific issues and principally rely on mainstream approaches. This book offers alternative positions such as cosmopolitan, libertarian, and left humanist thought, as well as applying ethical and political thought to specific issues, such as experimentation, factory farming, nonhuman political agency, and intervention. Presenting work by theorists and activists, insights are offered from both ethics and politics that impact theory and practice and offer essential considerations for those engaging in interspecies ethics within the political turn era.