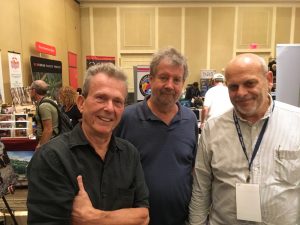 Jim Mason, Doug Moss and myself (L to R)

At this year’s annual animal rights conference organised by FARM in Alexandria, VA, I decided against speaking and instead donated my time to my publisher, Lantern Books, and its co-founder, Martin Rowe. This was a great opportunity to share my enthusiasm for books, produced by the preeminent publisher of its kind, with folks who enjoy reading and learning from books about animal rights and vegan, cruelty-free living. I also had a great time because I met up with old friends and colleagues, some of whom I hadn’t seen in decades! I also met for the first time such authors as Jo-Anne McArthur, whose photography in Captive is equally unsettling and inspiring.

It was great to see again Jim Mason and Doug Moss. I think the last time the three of us were in the same room together would have been in the 1980s. They both played pivotal roles in my involvement with the animal rights movement, particularly with spreading the word through writing and publishing. They also deepened my understanding of animal rights as a social justice issue that was integral to others including feminism and environmentalism.

Jim and Doug were friends in Connecticut in the 1970s and involved with the nascent US animal rights movement. Together with others, they established the Animal Rights Network, Inc., which later became the not-for-profit publisher for what eventually became known as The Animals’ Agenda magazine. Doug later went on to found the environmental magazine called E the Environmental Magazine. I became the editor of The Animals’ Agenda magazine in 1993. Sadly, I was its last editor as it had to close in 2002 because it could no longer survive in the depressed economy caused by the tragic events on 9/11 and competition from the emerging World Wide Web.

In my book, Growl, I recall how first met Jim at the RSPCA’s Rights of Animals Symposium held at Trinity College Cambridge in 1977.

During my time at BUAV [British Union for the Abolition of Vivisection], I was building up a relationship with the animal rights movement in the United States. I first made contact with American activists when I was at Compassion In World Farming. My colleague Thelma had corresponded with Jim Mason, who with Peter Singer was writing Animal Factories (1980), the groundbreaking follow-up to Harrison’s Animal Machines. Thelma and Peter Roberts provided Jim with information about European legislation and farmed animal agricultural practices. Jim and I first met at The Rights of Animals, that epochal RSPCA symposium in Cambridge in 1977, and immediately became good friends and like-minded colleagues. We kept in touch via airmail, our correspondence critiquing American and British animal advocacy. We shared the same ideas about strategy. We agreed on the need to build a movement within the context of a progressive political, social, and economic agenda. (p. 121)

The fortieth anniversary of the RSPCA’s Rights of Animals symposium at Trinity College Cambridge will be this August 18-19. In addition to meeting Jim for the first time, I also met the philosopher Tom Regan and his wife, Nancy, which I wrote about here.

In the course of our discussions in the late 1970s and early 1980s, Jim introduced me to feminism and its integral relationship with animal rights. We visited the vegetarian restaurant Bloodroot in Bridgeport, CT that was managed by a feminist collective. He encouraged me to read Women’s Creation by Elizabeth Fisher (1979) and Beast and Man by Mary Midgley (1980).

My awareness in feminism received another prompt from Carol J Adams. I was PETA’s first Executive Director at the time. In Growl, I recall

At first, I supported one of PETA’s most notorious and visible campaigns: the ‘I’d rather go naked than wear fur’ stunts. This protest was initially undertaken by a local U.S. group, and we copied it. As time went on, I became increasingly uncomfortable with the growing sexualisation of our actions. These concerns I kept to myself. However, over the course of a series of discussions with the feminist social theorist Carol J. Adams, I realised my commitment to feminism, as well as my political understanding of myself as a gay man, were no longer in harmony with PETA’s approach. (p. 134) 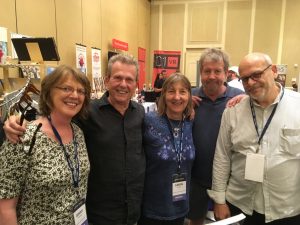 I now see my departure from PETA in 1992 to be a turning point in my life of vegan animal rights advocacy. My understanding of social justice expanded and my role as a social justice advocate deepened. I dedicate a chapter to PETA in Growl in which I consider its strengths and weaknesses.

At AR2017 a further impromptu reunion took place when Jim, Doug and I got together with Virginia Messina and Carol Adams. Virginia and Carol were celebrating the publication of their new book, Even Vegans Die (Lantern Books), which they co-wrote with Patti Breitman.

Martin and I sold many books at Lantern’s table. We met with many enthusiastic readers who were hungry for information and understanding about vegan, cruelty-free living and animal advocacy. I know from such great folks as the authors mentioned here and many others how important it is to be open to learning more about how to change the world. In Growl, I recall Jim writing in Agenda (as the magazine was then known in 1980) about the need for animal rights activists to

go beyond their immediate impulses towards something deeper: ‘Just as we made a commitment to self-purification and acted on it [by going vegan], we must now make a commitment to self-education and act on that to give ourselves a greater understanding of the politics, economics, history and culture of animal exploitation. This knowledge will be our most forceful tool in any campaign against animal oppression.’ (p. 171)

In my book, you can never have too many, er, books and the authors who write them, including those who I may disagree with. Yes, vegan, cruelty-free living and animal rights is about ending the exploitation of animals and achieving their moral and legal rights. But it is also about ideas and visions, which we must continuously draw from to learn and grow. This is how we can make ourselves to be even more effective in our social justice advocacy.