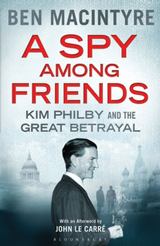 A Spy Among Friends by Ben Macintyre

There’s something fascinating about the so-called Cambridge spies: Anthony Blunt, Guy Burgess, Donald Maclean, and Kim Philby. They all came from the upper middle class and met at Cambridge University in the 1930s. They went onto hold various powerful positions in society while acting as double agents for the U.K. and U.S.S.R. or worked in the Foreign Office or for the Windsors as the Surveyor of the King’s Pictures.

I’m not delusional about the severe damage the Cambridge spies caused to Britain and its security as well as the deaths of many hundreds of people that their espionage resulted in. Nonetheless, I cannot but help find appealing the heroic, romanticised view of the Cambridge spies as they’re presented in, for example, the plays of Alan Bennett (e.g., ‘An Englishman Abroad’ about Burgess and ‘A Question of Attribution’ about Blunt) and in the telly series ‘Cambridge Spies.’ Not quite the same thing but I keep promising myself to read John le Carre’s spy novels but have yet to get round to doing so.

A book I have just finished is A Spy Among Friends: Kim Philby and the Great Betrayal by Ben Macintyre (Bloomsbury), a writer and editor on Murdoch’s The Times.

What makes this book different from the many others about Philby is that it’s about his friendships and particularly with Nicholas Elliott, who, like Philby, was a spy in MI6, Britain’s secret intelligence service. What’s fascinating is how Philby was able to hide his spying for the Russians from his wives and closest of colleagues and friends who all knew him intimately. There is, of course, a lot more to say about all of this but this briefest of descriptions will have to suffice.

There’s one aspect to the Philby story that stands out above all others, which made me very angry as I read the book. Philby was protected by his class because it couldn’t be possible that ‘one of them’ could be a traitor. This privileged status ensured that for years Philby, while in our employ, spied for the Soviets unchallenged.

Philby was under suspicion as a double agent for many years; however, there was a lack of evidence to prove conclusively he was guilty of spying for the Russians. His ability as a spy is legendary as well as his personal charm. He was ‘one of us’ despite a problem with alcohol, which, from Macintyre’s account, was consumed in vast quantities by everyone employed to protect us from the Soviets. At one point in his career, Philby leaves the secret service and even with the gravest of suspicions about his loyalty, he was reemployed by them! Our taxes paid his salary and for the costs — not least in lives — that the country had to bear.

Later on in the book Macintyre describes the preparations for the final confrontation that Philby had to face with the security services. One briefed Prime Minister Harold Macmillan with saying,

Besides, though he might be a traitor, Philby ‘should be treated as a gentleman’. (243)

What relevance does all this have to do with animal rights?

I’m angry about the state’s knee-jerk reaction that a belief in animal rights is a danger to society.

That the animal rights movement poses such a threat that Britain’s police and security forces are given a get-out-of-jail card to engage in long-term, intimate relationships, even fathering children, with animal rights activists. While these undercover police aren’t in the same league as the Cambridge spies, they essentially acted in the same way. One of the woman whose life was severely impacted is Helen Steel, who was one of the two activists who successfully sued McDonald’s in the historic McLibel trial. The Guardian reported her as saying,

I certainly feel violated by what they have done. It’s about power. We didn’t consent, and wouldn’t have consented if we had known who they were.

I’m also angry that the same and other undercover police officers may well have been involved in Animal Liberation Front actions in the 1980s and, in one instance, caused £300,000 worth of damage caused by to Debenhams because it had a fur store. Activists are appealing the convictions that they received for these acts while the suspected undercover police officers are free with their get-out-of-jail card. (For more, see The New Yorker ‘The Spy Who Loved Me.’)

Of course, the state in cahoots with financial vested interests acting as agent provocateurs and industrial spies and informants is nothing new.

In 1988 U.S. Surgical, a Connecticut-based company which experimented on animals, engaged individuals to represent themselves as animal rights activists with the purpose of damaging an effective anti-vivisection campaign against them. The industrial spies befriended one of the activists, Fran Trutt, who they coaxed into planting an incendiary device under the car of the company’s owner. The police were waiting and immediately arrested her. As author Will Potter noted, ‘The money for the bomb, the truck, the logistics, the encouragement—U.S. Surgical and a “counter-terrorism” firm had been orchestrating it all.’

Further, there’s public outrage about how the Metropolitan Police in London spied and infiltrated legitimate groups of concerned citizens, even including those family members were killed by the police.

And it doesn’t stop with the police.

There’s also the outrage about the intimate relationship between the Metropolitan Police and Fleet Street, the name to describe Britain’s newspapers, and particularly but not exclusively newspapers owned by Rupert Murdoch. Journalists using undercover investigatory techniques, including wire tapping, to get information to publish, including hacking the mobiles phone of a murdered young woman.

I could go on about how generally such security agencies as MI5 and MI6 in the U.K. and the FBI and CIA in the U.S.A. appear to routinely fail to predict or warn us against such global events as the fall of the Berlin Wall, collapse of the U.S.S.R., terrorist attacks such as 911, and the meltdown of the financial systems within the last 10 years. If they did have advance notice of these events, I would like to know why we weren’t forewarned.

But to return to the surveillance and sabotage of the animal rights movement.

I’m angry not only at the injustices of such people as Helen Steel but also how the police generally defend those who exploit animals and law enforcement officials who fail to implement the feeble laws that do exist that give some protection to some animals. Where are the undercover investigations, for example, of the companies who supply, probably illegally, antibiotics to farmers who feed them to sick animals because they’re held in such disgusting conditions? These vested interests are putting our health at risk.

To learn more about spying on the animal rights and other legitimate social movements, please read Undercover: The True Story of Britain’s Secret Police by Paul Lewis and Rob Evans. This is an important subject that is far from resolved as new developments occur and even more is revealed. If you’re on Twitter, I recommend following Paul Lewis (@PaulLewis) and Rob Evans (@robevansgdn). Other resources also include:

In Growl I recall how I had to work with the police in the 1980s on the national anti-vivisection demonstrations I organised for the British Union for the Abolition of Vivisection and coalitions of like-minded organisations involving thousands of protestors.

I’m convinced that among these groups were people who weren’t sincere in their motivations to help animals, but were agents provocateurs and police informants whose objective was to undermine, sabotage, and halt the progressive impetus for animal rights we were intent on accomplishing. I don’t have any tangible proof to substantiate my claims of infiltration other than suspicions and circumstantial evidence. For instance, I made it a point to go to police stations after demonstrations I had organised to check up on anyone who may have been arrested and conclude the planning discussions I had with the officers in charge of policing the event. Could it have been entirely coincidental that, after one of the national demonstrations I organised, I witnessed several demonstrators at the local police station walk past me and go behind the public counter at which I stood? I watched them remove animal rights buttons from their jackets and strike up conversations with police officers in uniform, whom they were clearly on familiar terms with. (116-117)

Thinking back to those times and other situations and individuals I now view with even more suspicion than I did then, I can’t help but wonder whether the course of events in the animal rights movement would have been different without the agent provocateurs and police and business undercover operatives who were–and still are–active. For example, would the animal rights movement’s strategy be free from violence if there had not been any malevolent outside interests whose agenda was to undermine our cause and poison our growing public support?

In Growl I explore what I believe to be the four key values of animal rights: compassion, truth, nonviolence, and justice. Call me paranoid but whenever I witness anyone advocating the opposite of these values–indifference, lies, violence, and injustice–I immediately question them and their motivation for helping animals.

Thinking about the contemporary animal rights movement and all of its actions in all of their diversity, we are a movement grounded in compassion, truth, nonviolence, and justice.

Only those with a financial interest in the perpetuation of animal exploitation will make the spurious claim that we are a violent movement. Of course, the violence that matters most is what is inflicted upon animals. But to end the violence we do to animals, we must also strive simultaneously to end all violence to everyone regardless of species.